times the only other lighting available was flickering candles or crude lanterns. The doors to the cells were made of heavy iron with very narrow viewing slits which, likewise, prevented the entrance of outside light and were secured with heavy iron bars. Leg irons and arm chains completed the security measures. The ten cells measured seven feet long, five feet wide, and seven feet high and were equipped with simple bunk cots. Two of the miserable cells are set apart, no doubt providing quarters for prisoners doing "solitary" confinement. The area in the middle corridor houses two cells--each only three feet wide with enough space to stand erect, they are windowless and dark. These are thought to be used for holding prisoners temporarily. The construction of the jail itself is of Dolomitic limestone quarried locally. The walls and ceilings were laid two feet or more thick and the original floors were of rubble. The north cell block is covered with a half-domed, rusty, heavy iron ceiling; the others were covered with cement at a later time. There would be few crimes today for which incarceration in the Dungeon would be seen as reasonable and humane punishment. Records indicate that the Dungeon was used for better than 50 years. Over the years, walls have been whitewashed, electricity installed, the old pebble floors covered with concrete and part of the underground sheriff’s residence now serves as headquarters for maintenance.
Today, the only “inmates” are visitors who stop by and wonder what manner of lawbreaker deserved this harsh treatment. Those must have been rugged times when only the hardy survived—adventurers, traders, trappers—some of those who no doubt ran afoul of the law and found themselves here instead of just “passing through” this lively river town. 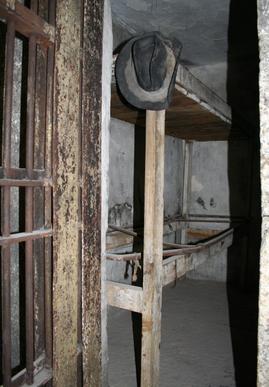 were treated worse than animals. The door of the jail opened onto the south lawn, with the door to the west (Beaumont Road) providing access to the Sheriff’s office/living quarters.  In those days the walls must have resounded with the ring of clanging chains and the prisoners’ outraged howls. The only lighting in the jail was provided by small windows near the ceiling on the south and north walls and would hardly allow for the escape of a man. One has to appreciate that in those 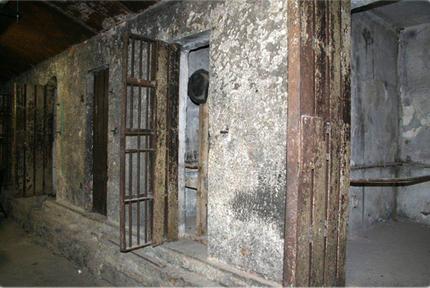 Beneath the courthouse in Prairie du Chien lies a remnant of Old Crawford County that must have held its share of high drama in days long gone. The “DUNGEON” built in 1867 replaced an earlier jail (the 1843 territorial prison, which was thought to have stood south of the current building). The word prison perhaps does not adequately describe this structure; more practical would be the word jail because really its function was to hold men (as well as a few women and children) for the short term only. This facility served the county until 1896, when the “commodious, substantial and modern jail...sanitary conditions...bath rooms with hot and cold water, lavatories with proper drainage...” was built. This Dungeon is believed to be the oldest surviving jail in Wisconsin. The jail itself is a most rugged sight to behold. Certainly men incarcerated